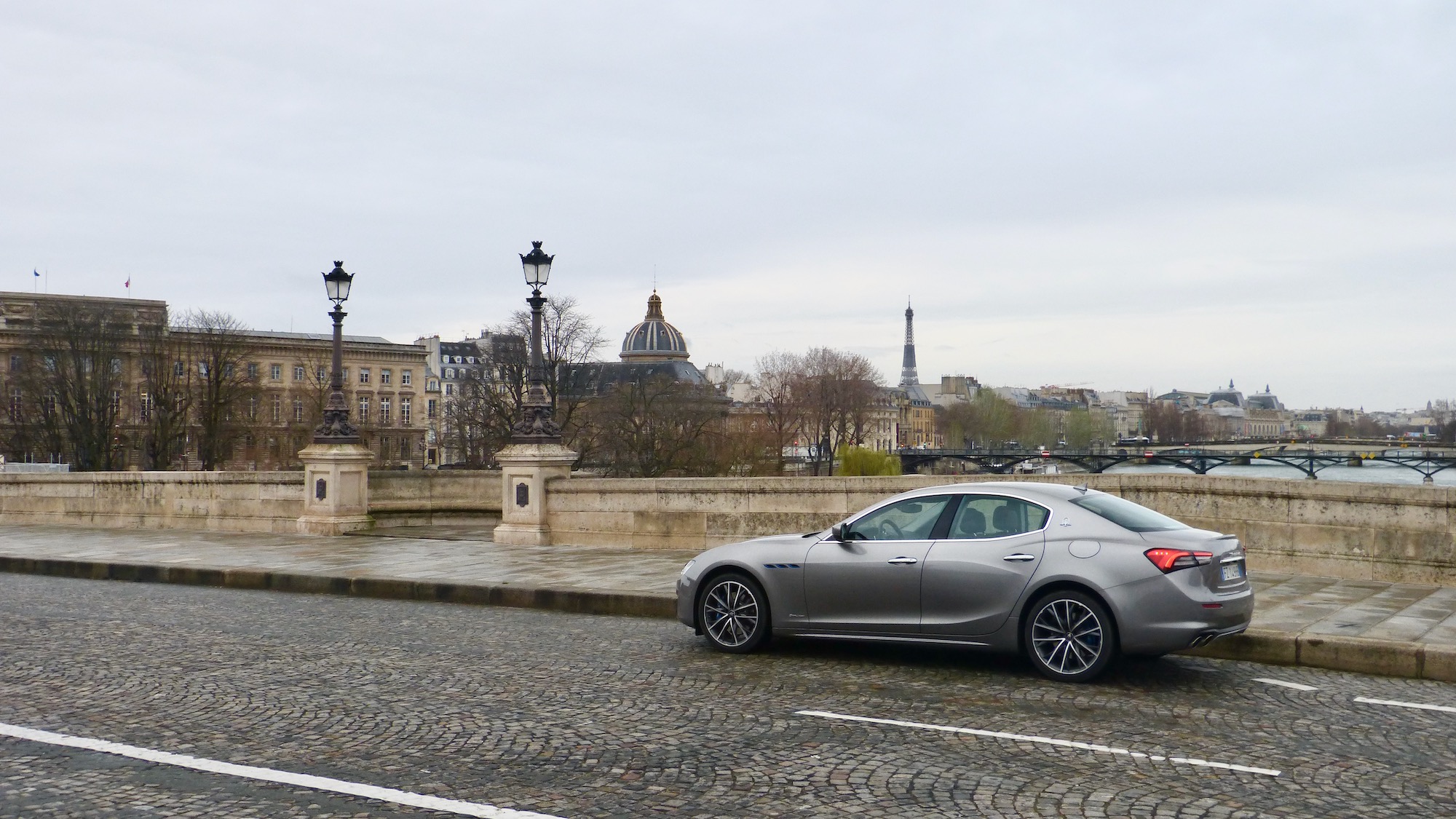 You can't imagine how dreadful I was writing this article. Obviously, to see the first reactions of my relatives when they learned that I was driving a Maserati for a weekend over € 100,000 equipped only with a 4-cylinder light hybridization, and to see the Most of the time the names of birds were heard about it, I thought to myself that I was going to have a job. Not to try to convince you, the marketing department of the brand with the trident will take care of it for me, but rather to judge this car by disregarding my previous test less than a week ago, namely the Ghibli Trofeo (to find here). It would have been better to reverse the order, but given the weather conditions encountered during these two tests, believe me, I did well to keep my original plans. 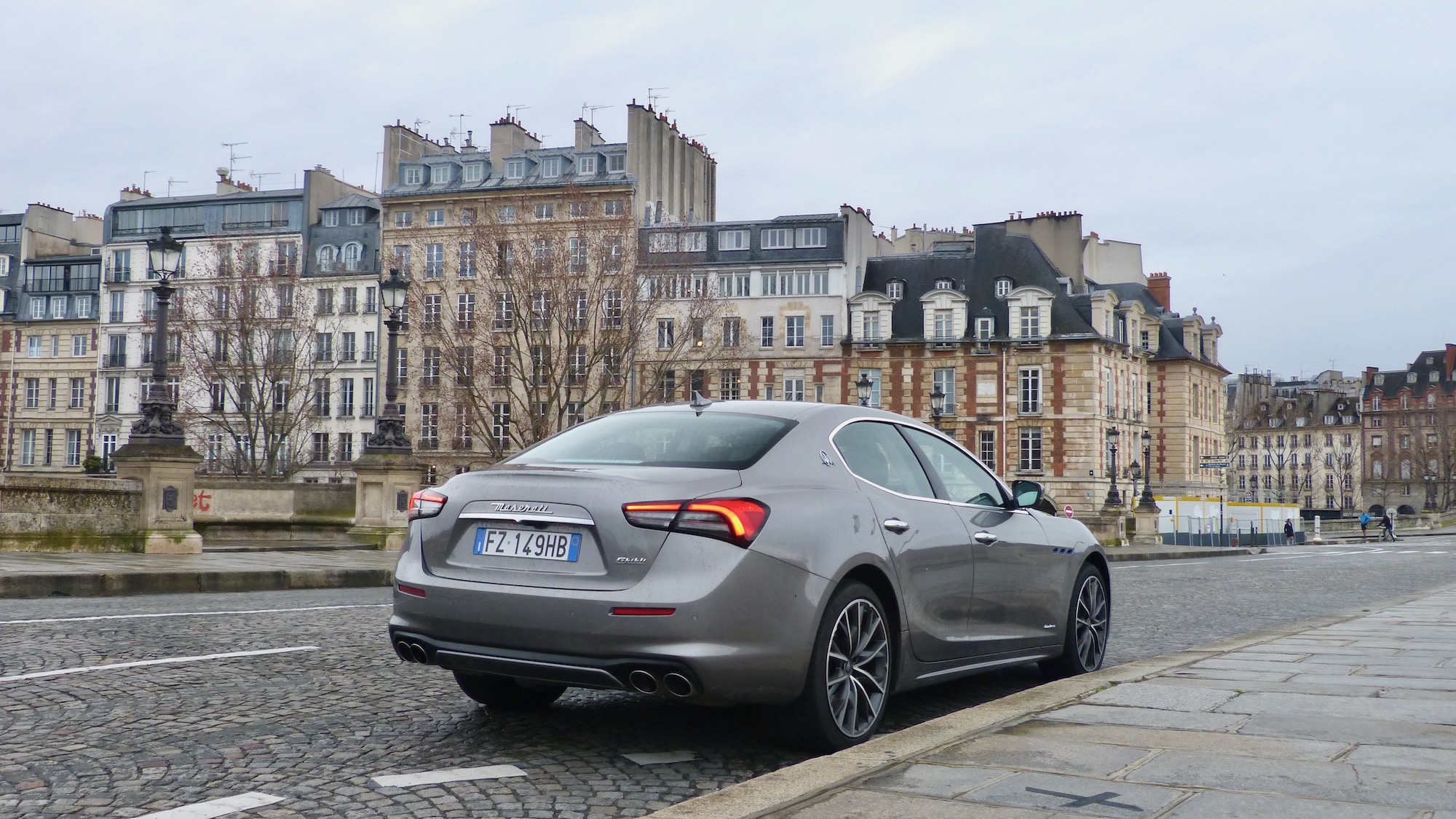 It is therefore for the very first time in its history that Maserati has seen its prestigious name associated with an electrified model, and as much to tell you that this is only the beginning, the Italian firm planning 100% electric models in the very next years starting with the Supercar MC20 which should have its own zero emission version. The so-called Ghibli Hybrid replaces the entry-level Ghibli Diesel at Maserati, while the Levante SUV is expected to follow the same strategy in the coming months. Having inquired a little before unfolding the product positioning of this Ghibli within the range and the history of the brand with the trident, I came across a number of tests by my colleagues from other media, roughly titling “The smallest engine under the hood of a Maserati in all of its history”. Obviously I winced a bit, vaguely remembering the 90s Ghibli spec sheet (second of the name) that I had read a few months ago. Indeed, if the latter was well equipped with a Biturbo V6, its displacement reached 1996 cm3 while the 2.0 L of the Ghibli Hybrid offers 1998 cm3. AND PAF! First snub to detractors of this version of the devil! Well, I admit that my explanation is more than flawed, especially as the Ghibli Hybrid returns 2 cylinders to its predecessor, mea culpa. 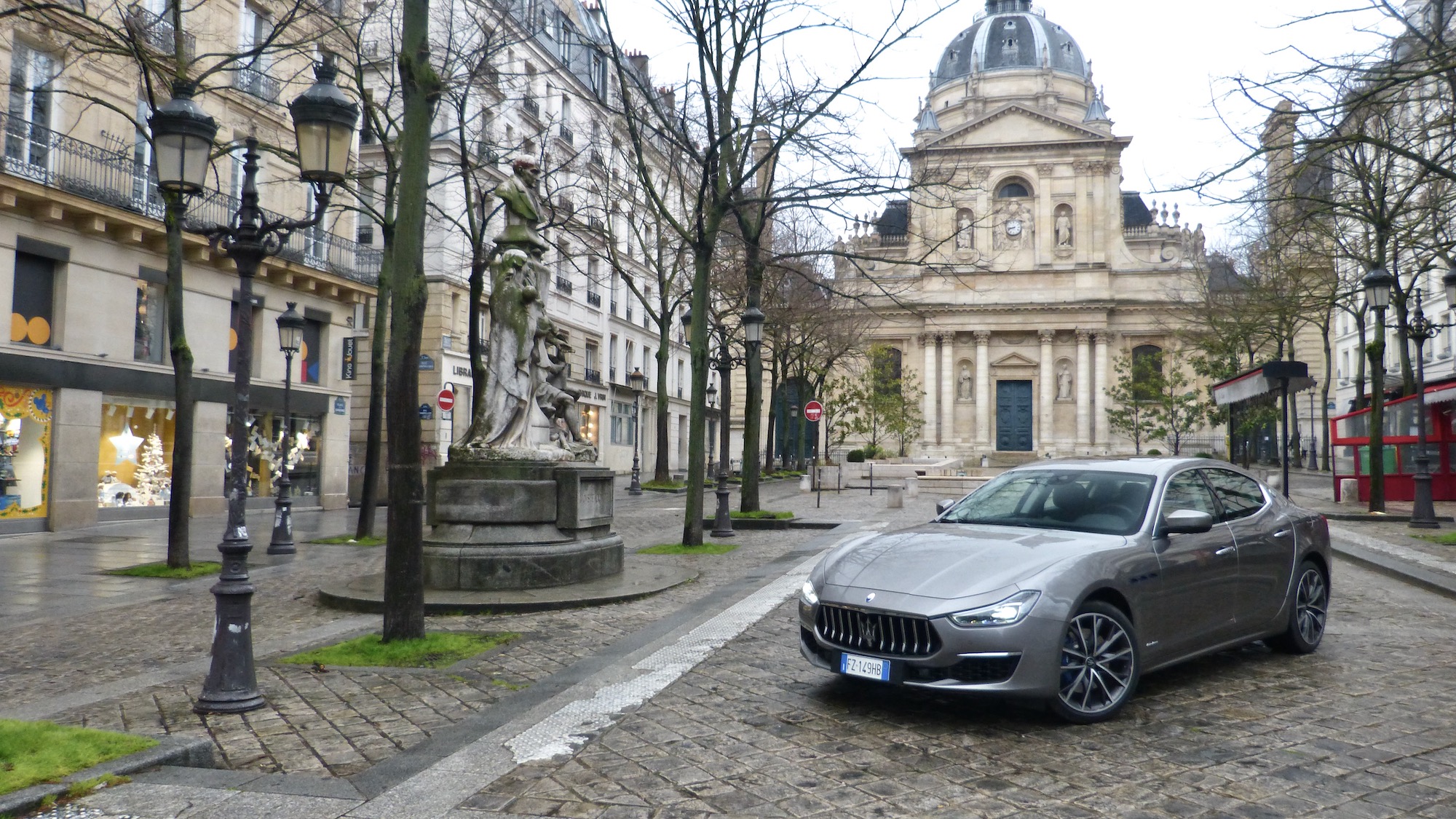 This famous 4-cylinder is none other than the one found under the hood of the Giulia Veloce (test to be re-read here), deeply revised for the occasion. By changing brand, it gains 50 horsepower in the process and is associated with an alternator-starter and 48V network, a light hybridization therefore which does not allow you at any time to run entirely electric but only to reduce the consumption of the heat engine by doing so. relieving during acceleration phases. Despite the 1880 kg empty on the scale, the Ghibli Hybrid allows itself more than honest performance by slashing from 0 to 100 km / h in 5.7 seconds, and reaching 255 km / h in top speed. Enough to do at least honor the coat of arms if someone comes to titillate you on the road. 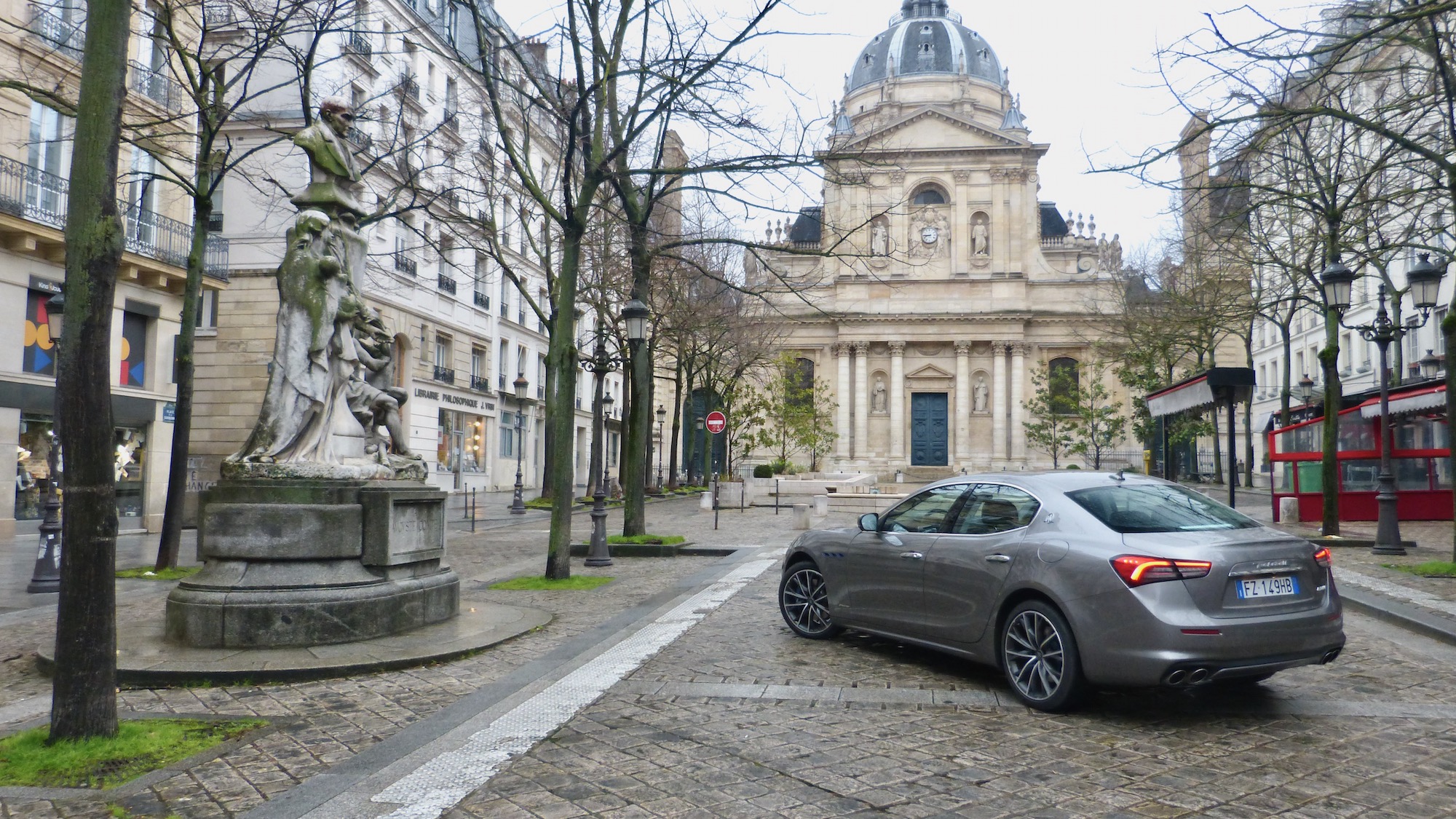 Externally, very difficult to differentiate the Ghibli Hybrid from a Ghibli V6. Only two details will tickle your ears: the side gills highlighted with blue notes and the trident on the C-pillar, pierced with a slight arrow, also blue. Inside, it is also difficult to tell the difference. You will obviously notice a tachometer whose red zone starts at (already) 6000 rpm and, as an option, a black leather with blue stitching or headrests with a blue trident embroidered in their center. By reading the product sheet of “my” Ghibli during these few days, I am quite surprised to see a price exceeding 110,000 € for this configuration, the starting price being displayed on the Maserati France site at 74,700 €. Over € 35,000 in options, you have to do it anyway. The GranLusso finish is already an option on its own that costs a lot of money, almost € 8,000. The “Black Piano” finish? More than 2000 €. The Bowers & Wilkins audio system? € 2,760. By dint of playing with the configurator, I noticed above all that my test car simply ticked each box in the options catalog. Suffice to say that I am treated. 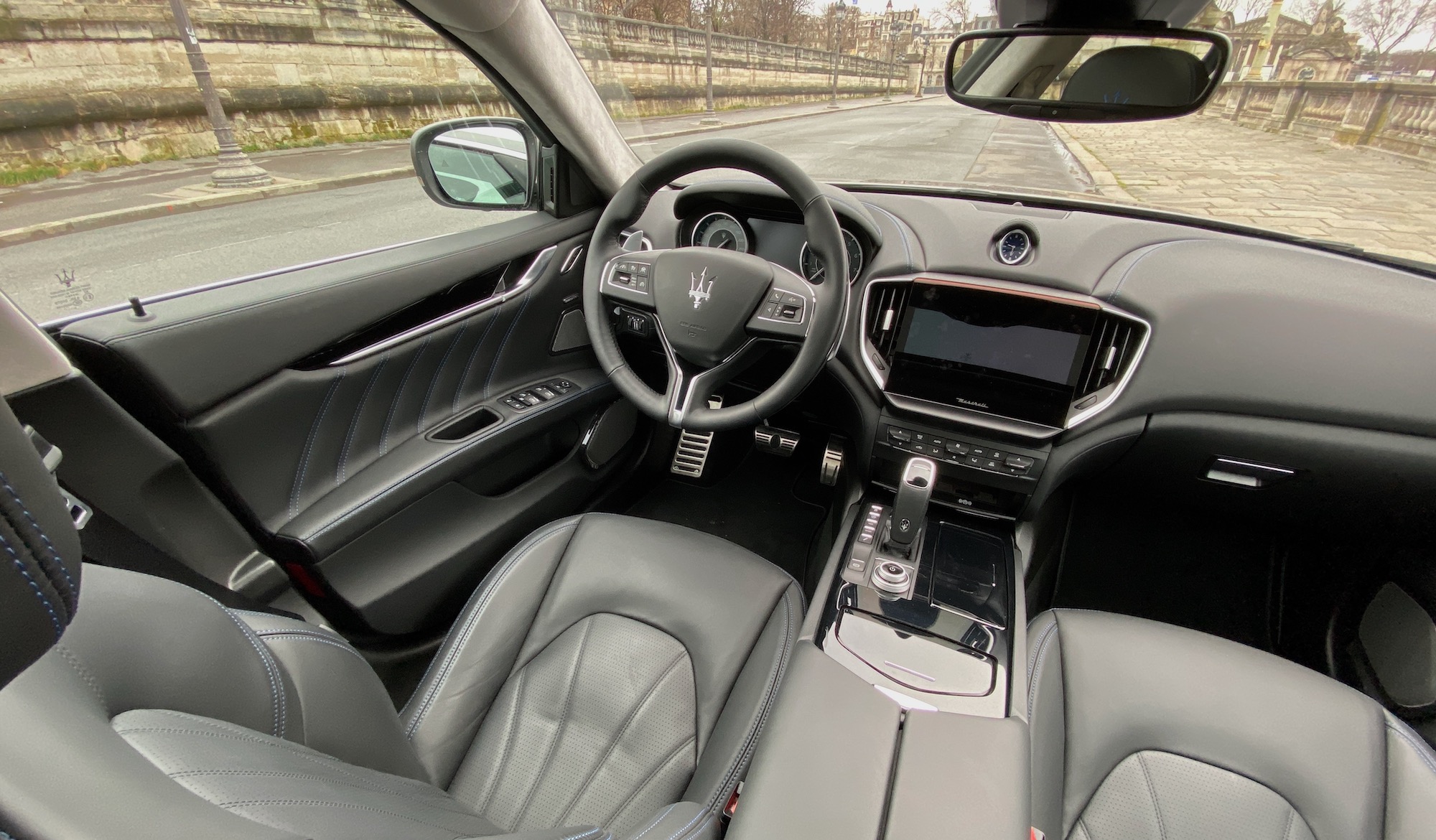 On start-up, the 4-cylinder snorts loudly and purrs for a few moments while it finds its idle speed. The surprise is total, the work on the exhaust seems quite simply stunning and I put a note on the fact that by questioning a passer-by attending this firing ceremony, no one will guess the nature of the heart of the beast . No more bad. The Ghibli Hybrid is then particularly discreet. The start & stop does its work at each red light and when the latter turns green, accelerating on a trickle of gas also maintains the illusion (at least on the outside) of a more noble mechanism thanks to a purring light, felt, perfectly worked, even in normal mode. Coming out of the V8, I'm bound to have a slight frustration with the elasticity of the block at the bottom of the towers. Yet the 450 Nm are readily available from 1500 rpm, so I put this impression on the account of a biased reference due to my previous test. 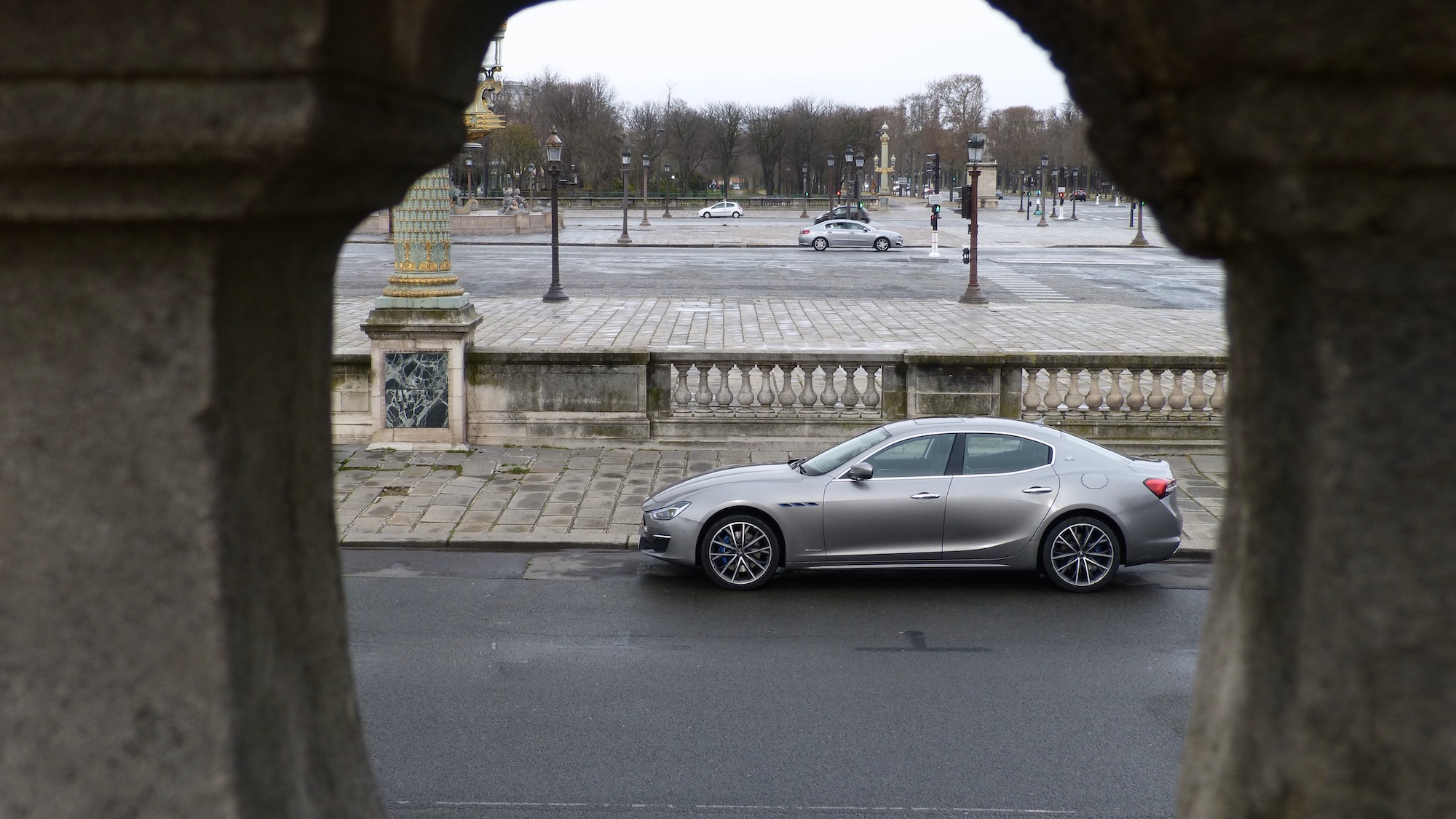 The Ghibli Hybrid adapts wonderfully to the urban environment, especially in this extremely discreet configuration which changes color Blu emozione somewhat flashy from the Trofeo. The adaptive suspension works in concert with the rims of sufficient diameter of "only" 19 inches to provide the near perfect compromise between looks and damping flexibility, which is put to the test on the cobblestones of Paris. Few people turn around in its path except your neighbor at a red light, but it has almost become a tradition. 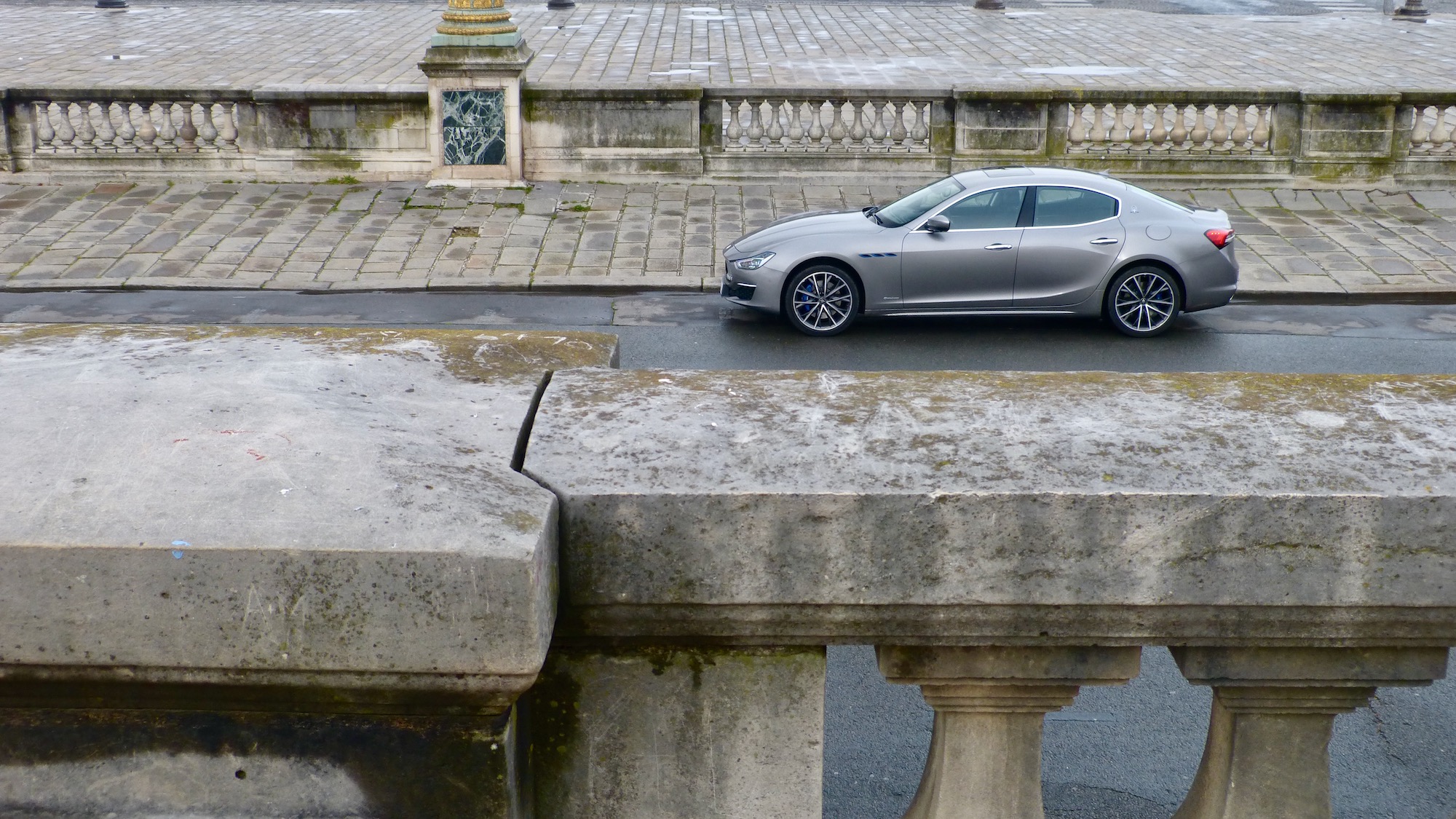 On the fast track, the 4-cylinder limits its rise in revolutions to the maximum as long as you do not rush it to avoid the unpleasant spectacle of a purely mechanical noise and not frankly noble as soon as you exceed 4000 rpm. On such a route, consumption drops drastically so as not to exceed 9.0 L / 100 kms. A great feat that is worth praising given the size and weight of the machine. 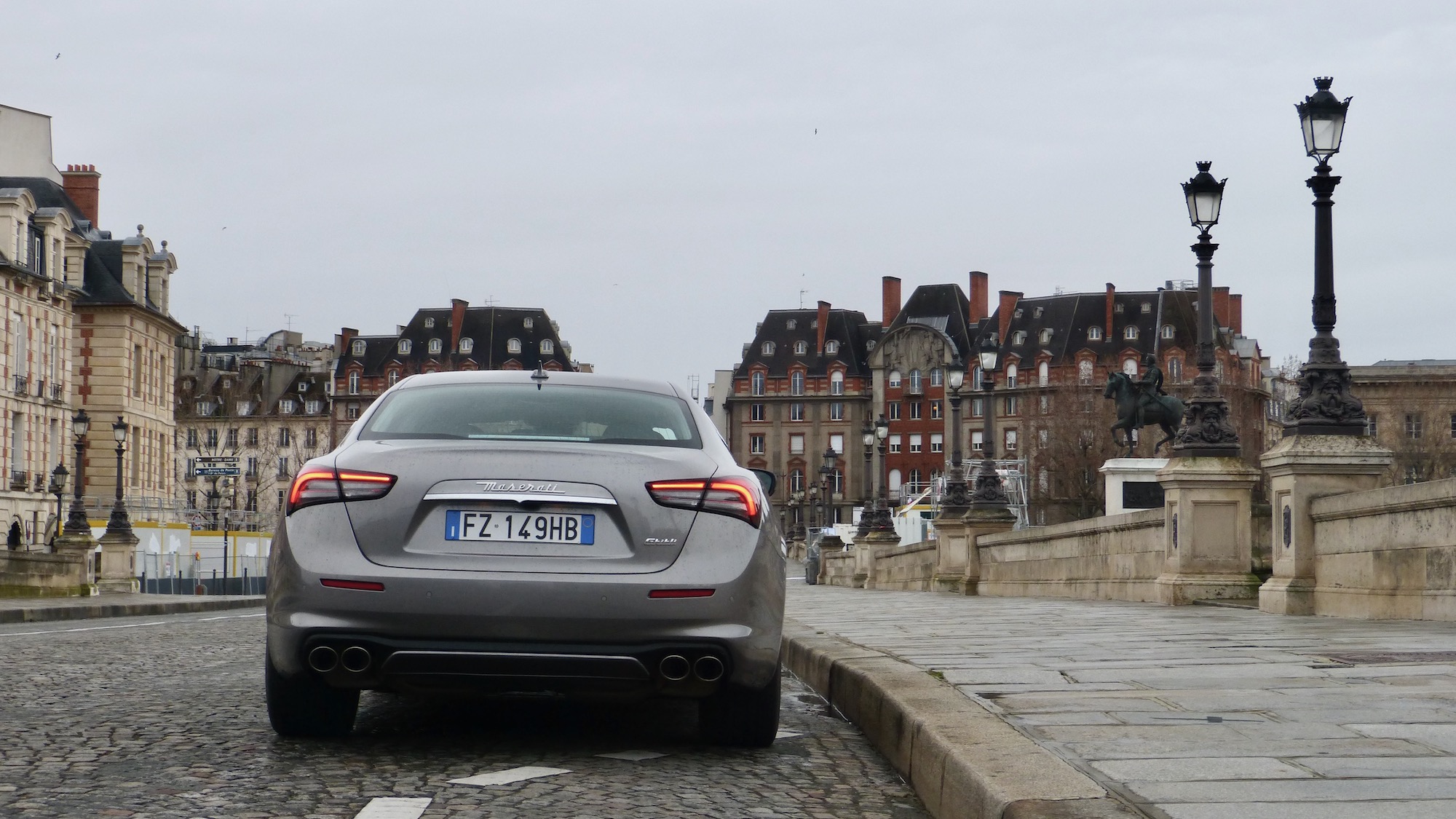 Not really convinced by the legitimacy of the exercise, I still let myself go to engage Sport mode and shift the gearbox via paddle control for a dynamic journey. Believe it or not, I was very pleasantly surprised. The train first and foremost. With an engine of such a small size, it is positioned just in front of the windshield bay and well behind the front wheels to obtain the most advantageous weight distribution of the entire Ghibli range. We cannot repeat it enough, but the enemy is weight. And even if this sentence may seem totally out of context given the subject of this article, it still partially holds true. On the engine side, the revs of the 2.0 L turbo are identical in terms of feel to what you can find under the hood of a sporty compact. Big kick in the ass when starting and unfortunately an engine that easily runs out of steam once the 4,500 rpm mark is crossed. In Sport mode, the sound of the exhaust becomes almost cartoonish, the backlash at each gear change is worthy of an Audi RS3 and the turbo suction noise reminds me over and over again of that of a Mégane 3 RS. The damping plays the card of versatility with a grip of roll present but contained and a slight crushing of the body towards the front under braking which pushes you to play of the late braking as the approach of a turn to wind up cleanly. rear axle. Let’s not forget that the Ghibli Hybrid is pure propulsion and while the helpers are on the lookout, a slight drift kicks in faster than you might think. I eat my hat if a Ghibli Hybrid customer uses his car as I just did, but Maserati honor is except dynamically, a sign that the Ghibli even in this variation remains above all a choice for customers who like ride, on their own I mean. 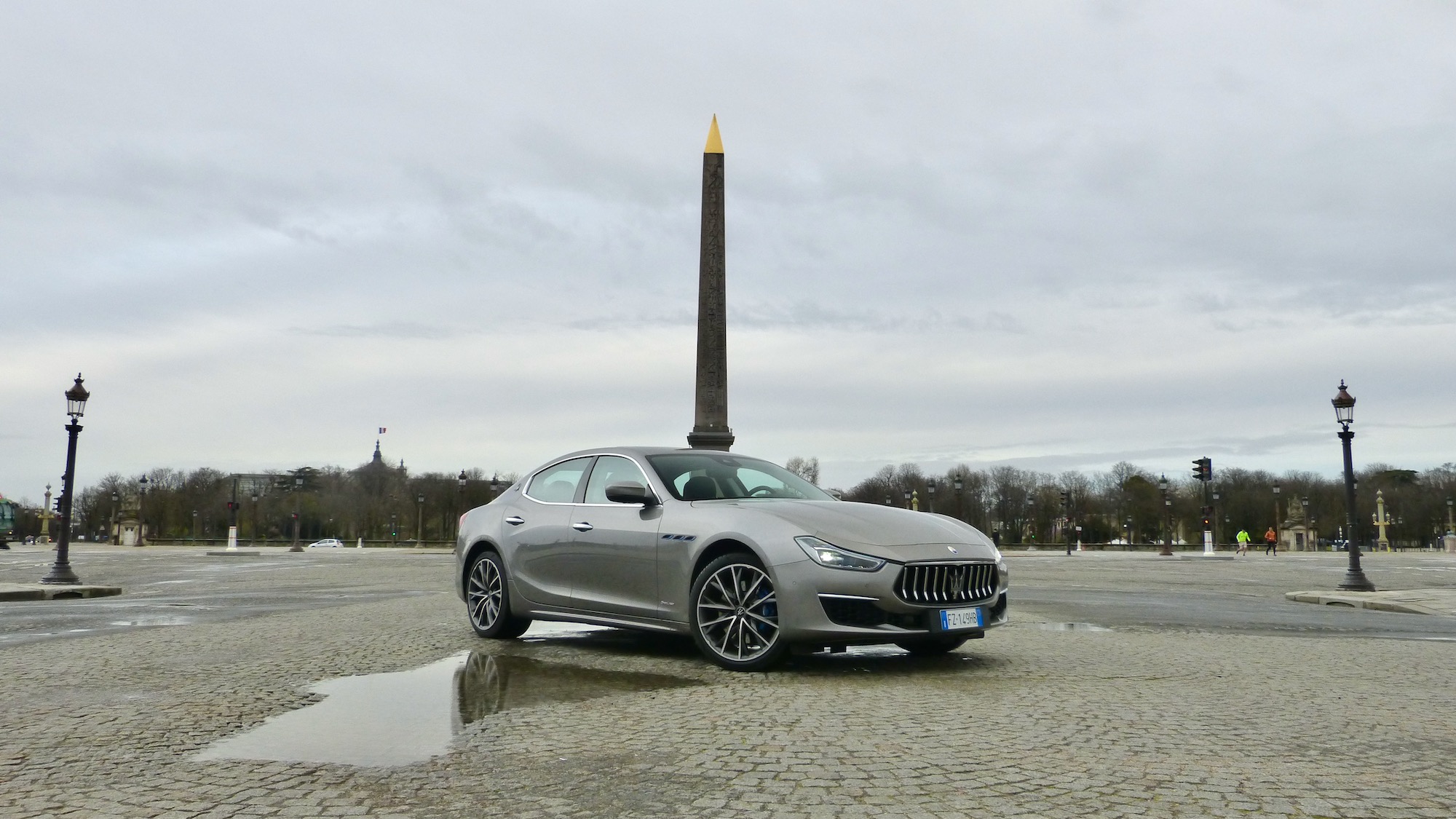 Buying a Maserati is never what you might call a "good deal". The discount remains significant, although less than the German equivalent and with a purchase price of at least € 74,700, in 2021 you will have to pay € 16,810 more for the registration penalty. With 203 gCO2 / km for our test model thus configured and around 12.0 L / 100 km of average consumption observed, the electrified 4-cylinder is indeed still somewhat turned towards the bottle. Compare to the € 77,150 that a Ghibli V6 350 requires in base price, to which it will be necessary to add a penalty of € 30,000… It is also difficult to find a direct competitor to the Ghibli Hybrid. I have studied at length the case of the Mercedes E 300e, which offers equivalent power (333 hp) from a 4-cylinder combined with an electric motor. But everything seems different between these two cars, the hybridization, the size, the price (no penalty for the Mercedes). No, the Ghibli Hybrid definitely doesn't have any real competition. It remains to be seen whether the substantial saving of € 20,000 over a V6 version will sell your soul to the devil of mild hybridization, that's your business. 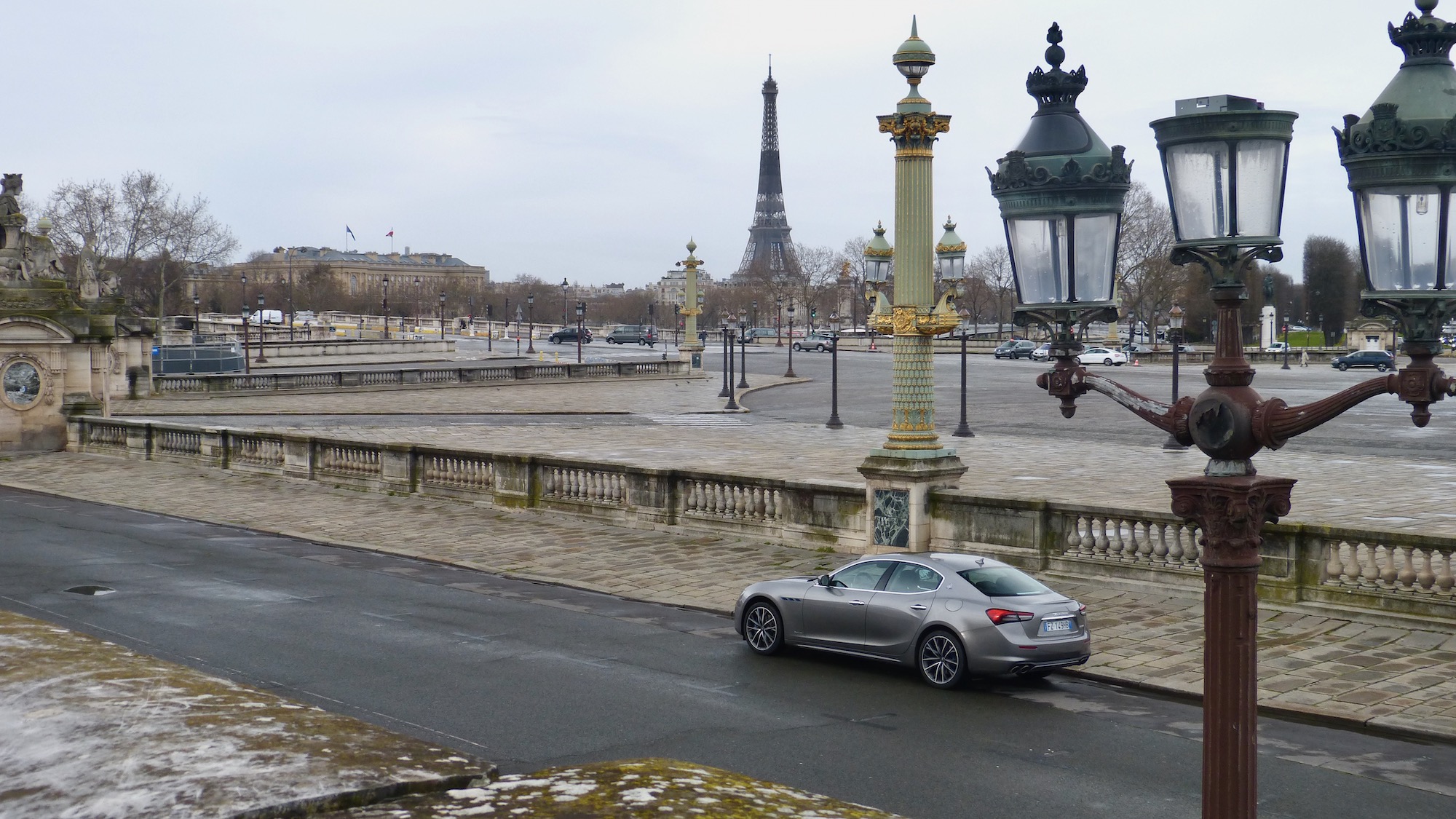 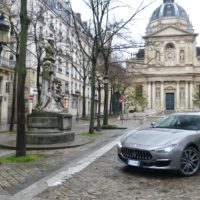 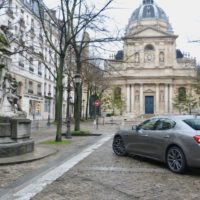 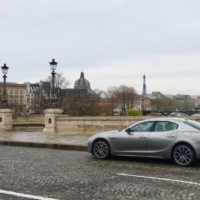 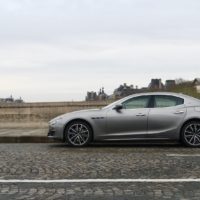 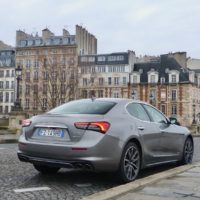 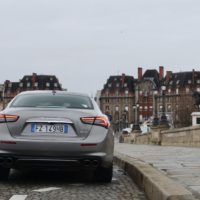 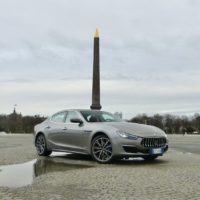 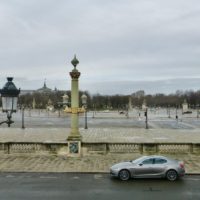 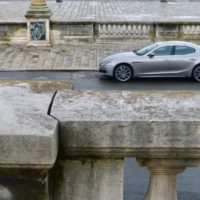 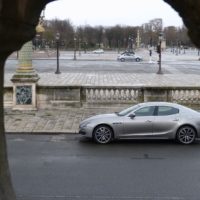 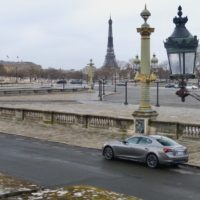 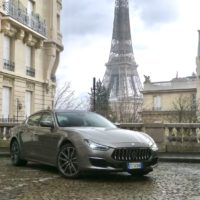